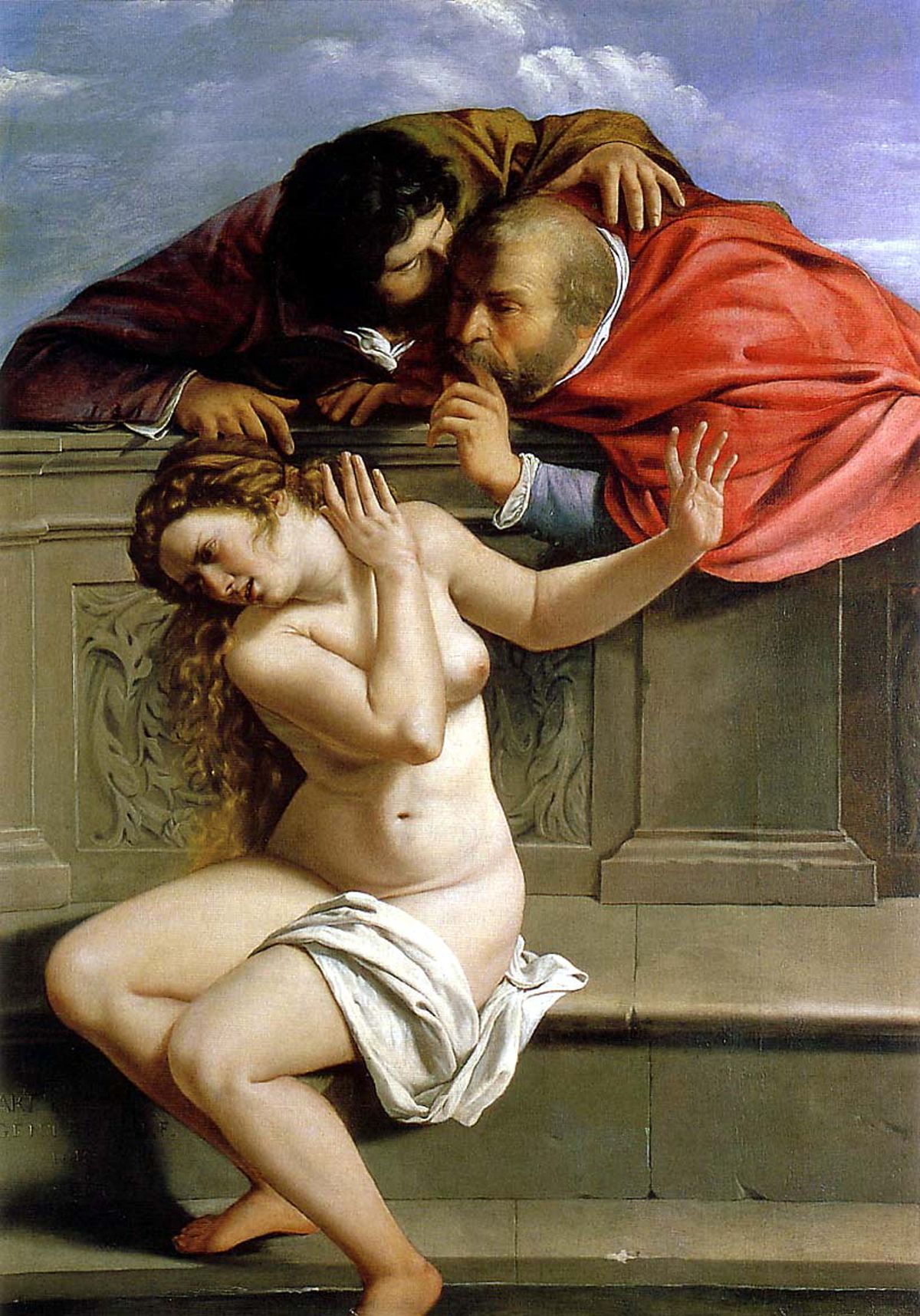 My research for these daily doses has delivered some surprising stories, and this is the most astonishing to date….

The story of Susanna and the elders is a biblical one; when Susanna was about to take a bath, she was approached by two elderly men proposing to have sex. She refused, and in revenge, they made up a story accusing her of adultery with a young man. “The assembly believed them, since they were elders and judges of the people,(…)” and she was sentenced to death. Susanna pleaded to God who put the Holy Spirit in Daniel. He discovered the truth by cross-examining them; Susanna was saved and the men were sentenced to death.

If you look for paintings about this story, you will find a lot of them (try a Google search). Fare more than the story itself merits, and they all depict the same moment; the men preying on (naked) Susanna. Why this interest and why this precise moment? The moral of the story is made very clear in the book of Daniel: God saves who hope in him and punishes the ones who commit perjury.

“The whole assembly cried aloud,
blessing God who saves those who hope in him.
They rose up against the two elders,
for by their own words Daniel had convicted them of perjury.
According to the law of Moses,
they inflicted on them
the penalty they had plotted to impose on their neighbour:
they put them to death.
Thus was innocent blood spared that day.”

If the fact the men sexually assaulted her isn’t that important in the story, why paint it and not the moment the elders are punished, or Daniel saves Susanna from death? Well, apparently, there was a market for paintings with older men looking at a half-naked woman bathing. Among these paintings, there is one that stands out.

Take a real good look at Gentileschi’s painting; you can see the hurt in Susanna’s face, both her arms are held high in defence, and she can’t bear to look at her assailants. The men are threatening her with an accusation of adultery, which will mean certain death by stoning. And she knows: “If I yield, it will be my death; if I refuse, I cannot escape your power. Yet it is better for me to fall into your power without guilt than to sin before the Lord.” Contrary to most other paintings, this one isn’t about the nakedness of Susanna. She was taking a bath, so of course, she was naked. But we can only see one of her breasts because she had to raise the arm protecting it in self-defence. And there is no sexual undertone or ambivalence in the painting; this is a woman being sexually harassed.

Artemisia Gentileschi isn’t a well-known painter. And if you are not familiar with Italian names the fact she is a woman may come as a surprise, and, even more surprising, she was only 17 when she made this painting. Two years after she finished it her tutor Agostino Tassi was charged with raping her. During the trial, she had to undergo a demeaning gynaecological examination to establish her loss of virginity and was tortured with thumbscrews to establish she was telling the truth. Tassi was convicted to a 1-year sentence. But although the trial uncovered that in addition to the rape, he had planned to murder his wife, had committed adultery with his sister-in-law and planned to steal some paintings he never had to serve his sentence as it was annulled almost immediately. The incident weighed on her, and many of her later works show strong and suffering women from myth and the Bible.

Officially there is a 1-2 year period between this painting and the rape by Tassi. But take a real good look at it, painted by a 17-year-old girl; look at the despair and hurt in the face of Susanna and ask yourself if it could have been painted without first-hand experience.