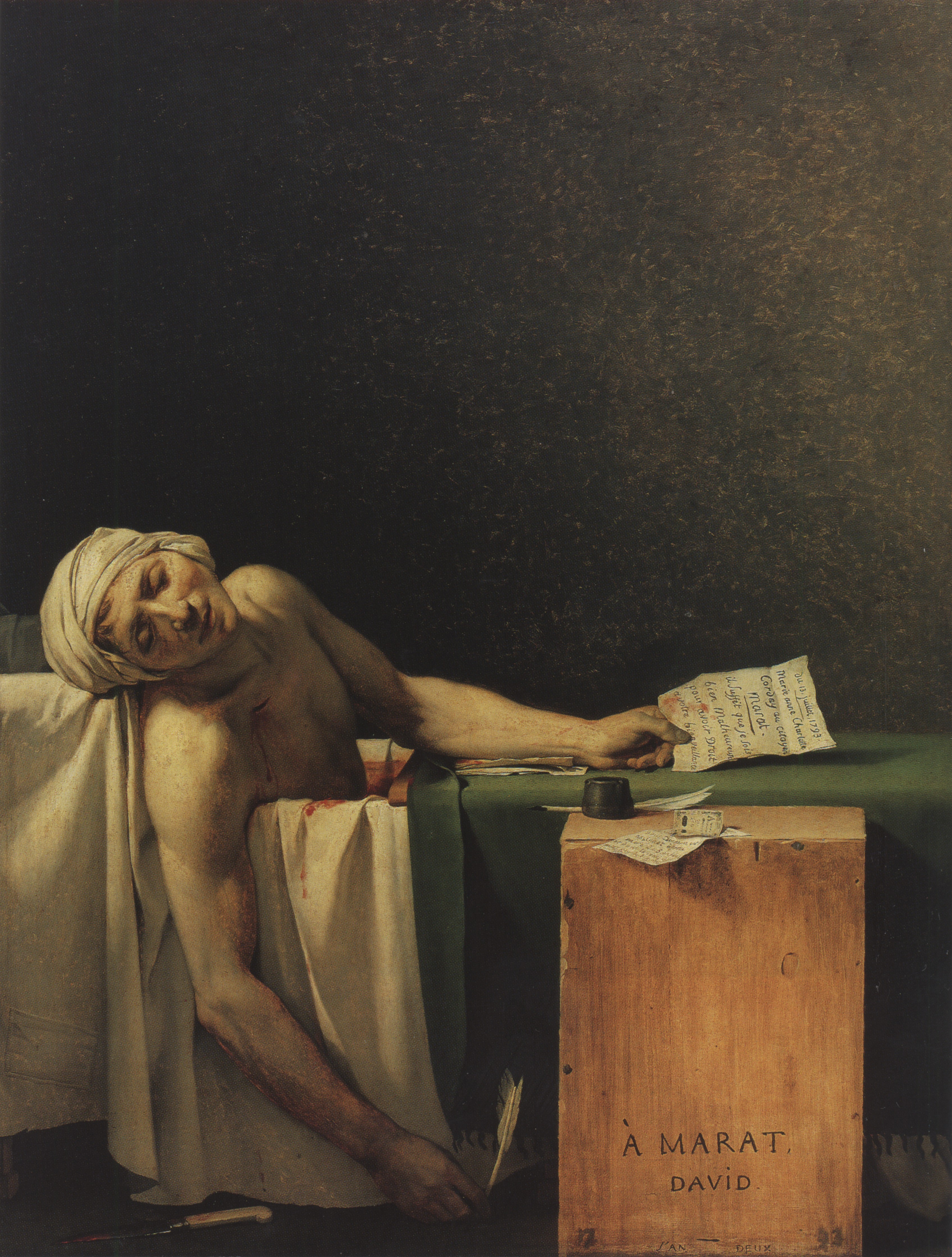 The French Revolution lasted from 1789 until 1799. In this very bloody period, France was transforming from an absolute monarchy to a republic. Jean-Paul Marat was a revolutionary leader and one of the many people who were murdered along the way. The painter Jacques-Louis David was a personal friend (and supporter of the revolutionary cause) and in memory of Marat painted this painting of him.

Marat was confined to stay at home because he suffered from a serious skin disease for which he took regular baths, often working. On July 13th, 1793 the 24-year-old Charlotte Corday came to his door and asked for an audition. She was well prepared, both for the murder and her punishment (she had already written her farewell letters expressing the hope that “with my single act of violence I will bring peace to my Nation”).
She first did send a letter to Marat which she hoped would spark his interest:
“I come from Caen. Your love of your country must make you wish to know the plots that are hatching here. I await your reply.
Charlotte de Corday. Hôtel de la Providence.”
As she got no reply she did send a second letter which read: “I wrote to you this morning, Marat, did you receive my letter? Can I hope for a moment’s interview? If you have received it, I hope you will not refuse me, seeing how interesting the business is. My great unhappiness gives me a right to your protection.” (the last line of this letter can be seen -in French- on the letter which Marat still holds). She knew this letter would arrive at seven in the evening and she showed up at Marat’s house just after the letter arrived.
When requesting an audience, Marat’s wife refused, asking her to come back in a few days. But Charlotte kept on arguing she had important information and when Marat heard them and allowed Charlotte to enter. They talked in private and while Marat was taking notes (He’s still holding the feather pen) she stabbed Marat with a knife in the heart which killed him instantly She was executed by guillotine four days later. Although she hoped her execution would make her a martyr, the opposite happened. Marat was seen as one, and the revolutionary movement used the murder to convict important Girondin leaders to the guillotine claiming them to be in on the Charlotte’s ‘conspiracy’ (which was never proved).

The historian Simon Schama describes the ambivalence of David’s painting best: “If there’s ever a picture that would make you want to die for a cause, it is Jacque-Louis David’s Death of Marat. That’s what makes it so dangerous – hidden away from view for so many years. I’m not sure how I feel about this painting, except deeply conflicted. You can’t doubt that it’s a solid gold masterpiece, but that’s to separate it from the appalling moment of its creation, the French Revolution. This is Jean-Paul Marat, the most paranoid of the Revolution’s fanatics, exhaling his very last breath. He’s been assassinated in his bath. But for David, Marat isn’t a monster, he’s a saint. This is martyrdom, David’s manifesto of revolutionary virtue.”