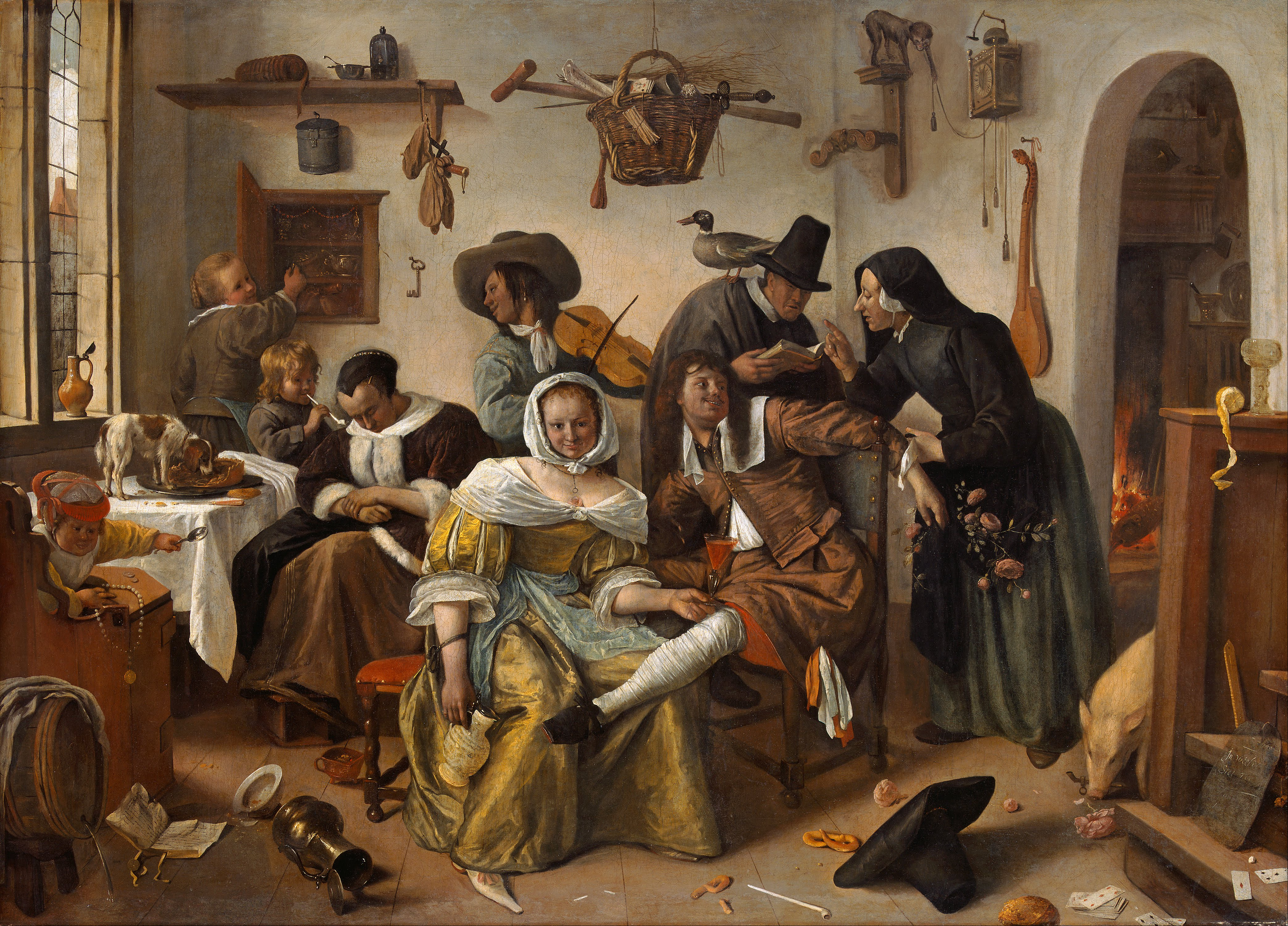 As most painters did, Jan Steen painted various kinds of paintings; portraits, biblical and nature scenes. What he is famous for however are his humorous scenes of (chaotic) daily life. The Dutch saying ‘het huishouden van Jan Steen’ (the household of Jan Steen) probably exists since the 17th century and it is used to refer to a house or room looking chaotic and messy.

In Weelde Siet Toe (beware of luxury – this title is written on the tile standing in the bottom-right corner ) is a prime example and has wonderful details to look at.

The woman at the table has fallen asleep probably because she drank too much (the empty can of beer slipped from her fingers and is laying on the ground before her), and without her supervision, the household has turned into chaos. If she hat watched the key hanging just above her, the cupboard would still be locked. Now it is open allowing the girl to steal a coin from a purse. The boy next to her is smoking a pipe. The dog has jumped on the table and is eating the pie. The little boy at the bottom left is still holding his silver spoon but has pushed his bowl on the ground while playing with an expensive pearl necklace.
The young woman in the middle is drinking wine, holding her full glass between the legs of the man sitting next to her. This man with his jacket unbuttoned is obviously enjoying himself. His leg rests on the young woman’s knee and his and his hat, pipe, and playing cards are carelessly thrown on the ground. The young man with the earring is both playing the violin and eying the girl.
All of them are ignoring the serious looking older man and woman who – dressed in dark colours are trying to give them some good advice. The woman (a nun?) raises her finger while talking but the sitting man just laughs at her. And the sour-looking man is reading aloud from a book, but the duck on his shoulder indicates they consider his ‘quacking’ as nonsensical.

And there is more; the pig on the left is holding the tap of the barrel of beer on the left, and beer is streaming on the floor. It will soak the official looking letter thrown carelessly on the floor. The pot of hot coals is standing on the floor instead of in the stove below the feet of the sleeping woman. The peeled half-eaten lemon (an expensive fruit) and the bread on the floor indicate a waste of food.
A little monkey is stopping the clock on the wall by holding one of its weights; “in folly, time is forgotten”.

And the roses on the floor before the pig refer to the saying “Throwing roses for the swines”; these people are not worthy of the wealth they are in. But what should they beware of? Just look at the top of the painting; empty money pouches are hanging from the shelf, but more telling is the basket hanging from the ceiling. It contains various objects reminding the viewer of poverty, disease, and disaster; a crutch, a sword, a leper’s rattle, cards. Fortune can change, especially when you don’t pay attention.